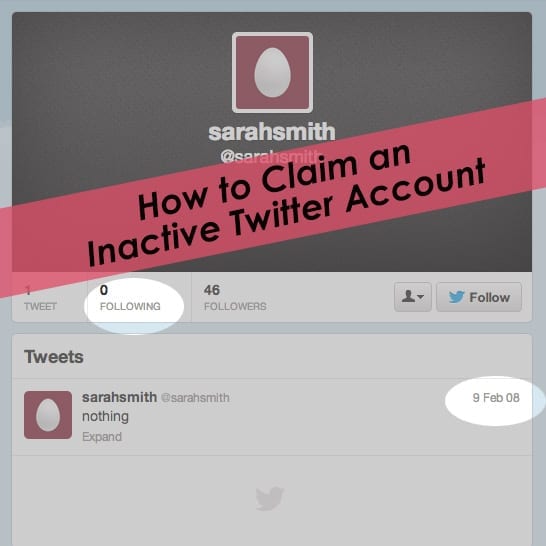 After patiently waiting for 6 months I finally have my twitter name @YesMissy!  I started my blog just over half a year ago, and didn’t think of starting a Twitter account until about a month or two into it. Unfortunately, at that time @YesMissy was taken.  But the account was completely abandoned: there were only 3 tweets in the timeline, 0 followers, and no sign of any new tweets.  Grr.. How frustrating is that? But I knew there must be a method to claiming an inactive Twitter account.

Sure enough, I did some research and found some people were able to claim a username if had proof they owned the company name or a registered trademark. I don’t have either, but I do own the domain name, and email, as well as Etsy shop and Facebook page by the same name. As it turns out, Twitter’s inactive user policy that allows people to reclaim inactive accounts after 6 months of non-tweeting or no activity. So for the past 6 months,  I’ve been holding my breath with my fingers crossed hoping that this particular user wouldn’t tweet again for the rest of the year!!  But once the time period was up, the process to claiming the inactive username was surprisingly simple. Read on to see the steps I took to claimed an inactive twitter account…

Here are the steps to claiming an inactive Twitter name:

I’d love to connect with you on Twitter, so let me know if your username in the comments below!

Update: It’s great to see some of you were able to claim your own Twitter usernames as well!  I’ve added some more details to the instructions to help out those of you who are also wanting to claim inactive Twitter accounts. From the feedback I’ve had over the past few months, most people were able to claim the inactive Twitter usernames also owned the domain/email of the same name.  Good luck and let me know if this method works for you!

Eileen is the Canadian lifestyle blogger behind YesMissy. She's a creative mind, lover of fashion, and wanderlust at heart. Here you'll find her thoughts on style, beauty, travel, decor and more. Beyond just a the blog, YesMissy encompasses the philosophy that life is about creating moments and not waiting for them.

What to Pack in Your Carry On

10 Clever Tips on How to Organize Small Spaces

Home Workouts Made Easy with iFit

Hi, my name is Eileen!

Yes Missy is a light-hearted lifestyle blog that celebrates living a beautiful life and all the things that make it special. Here you’ll find things I love and feel passionate about, from fashion and beauty to decor, travel, and more. Beyond just a blog, Yes Missy encompasses my philosophy that life is about creating moments and not waiting for them.